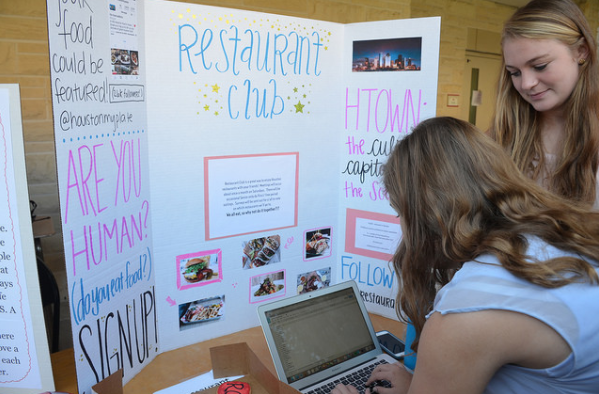 The Restaurant Club poster asked, “Are you human? Do you eat food?”

High school students have a reputation for loving food. Seniors Laurel McKelvey and Mary Shannon Tompson channel that passion into Restaurant Club, a club where members at Houston restaurants. Their interest is relatable to many; their club fair poster even asked “Are you human? Do you eat food?”

Math teacher Kimm Shafer sponsors the club, which is co-led by McKelvey and Tompson. Restaurant Club’s leaders want to introduce its members to new restaurants that they may not have otherwise heard of.

“So many people at St. John’s always go to the same restaurants, which is great, but it’s cool to experience the good food and culture that new restaurants have,” Tompson said.

Restaurant Club and Spanish Club hosted a joint outing to Mi Luna, a tapas bar in Rice Village.  Another of the restaurants that the club visited is the Conservatory, an underground food court downtown that hosts many vendors with a variety of cuisines.

“I had never been to the Conservatory before, but it was really fun,” freshman Carolyn DePinho said. “It was also great to have people from different grades all together.”

In the future, Tompson hopes to visit other restaurants like Jenni’s Noodle House and Coltivare, a farm-to-table restaurant in the Heights.

“Houston is the culinary capital of the South,” Tompson said. “It’s so diverse, and there’s so much good food in the city.”