Snail Mail’s Lindsey Jordan opens up about her journey

As a big fan of Snail Mail, I always admired Lindsey Jordan from afar (not in a creepy way). She seemed to embody everything I wanted to be. She was young, she was articulate, and she made music that touched bases with indie, punk, and rock; plus, she could pull off red lipstick really well. When she agreed to do an interview with me, I was thrilled. The day of the show, which also happened to be Jordan’s birthday, I walked into Walter’s, a familiar venue, armed with my camera, questions, and a Whataburger table number “31.” Snail Mail began soundchecking, not with one of their songs, but with the familiar grade school anthem “You Belong With Me.” For me, this confirmed that this band would live up to all of my expectations. I met Jordan, along with Stephen Steinbrink and Lisa Larson, in the balloon-filled green room and wished her a “happy birthday” to start things off. I handed her the Whataburger table number as an 18th birthday gift and explained how if you flipped it upside down and covered the opening of the “3” it passed for 18. We then talked about everything from misogyny, to her musical inspiration, to Avril Lavigne.

The beginnings of Snail Mail and music in high school

Jordan graduated from high school this year, balancing schoolwork and touring with her band. My first set of questions tackled her experiences in school and the beginning of Snail Mail.

Being pretty young in this music scene, has age ever been an obstacle or problem for you?

First, it’s annoying, and second, this tour has been predominantly 21 plus [shows], and in the West Coast that means a lot. In a lot of cases we aren’t even allowed in the venue. We’ve been able to get around it. We actually haven’t stayed outside of the venue yet, but it’s really hard to be under 21; security does not like that. Also at South by Southwest, we couldn’t even hang out at our own showcases, and it was very hard getting in and out of our own showcases because we were under 21.

How did you navigate school and playing in a band at the same time?

I didn’t. I missed 37 days for touring and I didn’t really get away with it. But I graduated, and I was in a couple APs and I narrowly–actually, I somehow for first quarter and fourth quarter was able to get my grade point average for the end of the year to a 4.03. But I think I’m just a good test taker; I missed so much school and I had so many missing assignments, so I actually would not recommend it to anyone reading this.

How did you personally come to find your “musical style”, and sound and lyricism?

Electrelane is how. I feel like the best thing you can possible do is just absorb as much art that you respect as you can. I just love to listen to, just absorb as much music as possible, listen to as much diverse music as possible and check out everything you can. Go to shows and meet people. I love to read and just absorb any kind of art possible. I kind of just played what felt natural. I think Snail Mail’s sound as it is didn’t really come to be until I wrote a lot of songs and got rid of a lot of songs and found something where I was like, “Wow, I can identify with this and enjoy playing it every night.” I write lyrics where every single night I’m like “Oh, yeah! I can go back to this feeling.” I think it’s all about just making something you know you believe in.

Do you remember your first show?

I did some solo shows. I did one, maybe two. Then Snail Mail’s first show as a band was really lucky. We played with Sheer Mag, Screaming Females, Priests, and some other really cool punk bands at this festival in Baltimore called Unregistered Nurse Fest. It was booked by my friends Dana and Emily, and I just got lucky in that I was just admiring it out loud and my friend who books it was like, “Do you have a band? Do you want to hop on?” I had these songs that I wrote and I just got two friends together just to play this one show. They’re not the same two people I play with now, but Snail Mail formed just to play the one show and then the three of us continued playing shows for maybe six months and then these guys [gestures to her bandmates] came and they’re touring with me now and I think Snail Mail will continue to evolve in a positive direction. 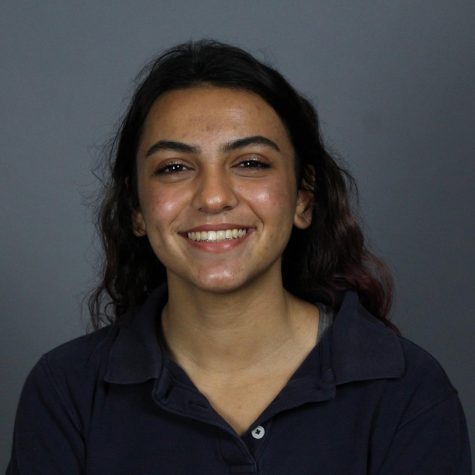 Lilah Gaber is an assignments editor. She is a senior, and this is her third year on The Review.