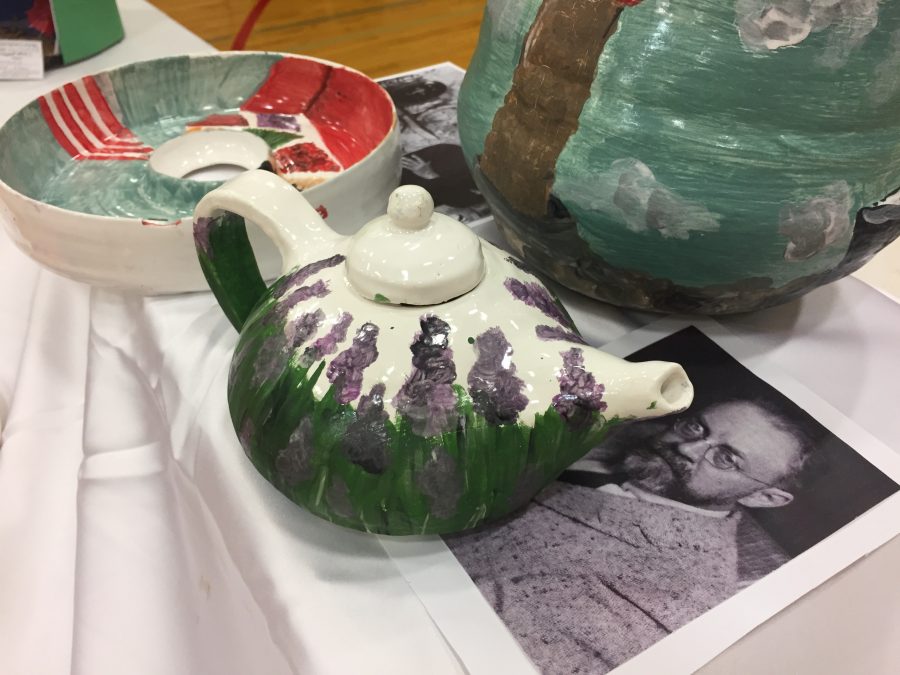 Day in the Life of French Symposium

2:40 p.m.: The bus leaves.  At this point, I do not know what school or city I am even going to, despite the multiple emails I have received regarding this event.  By Friday, my inbox is solely composed of topics related to Symposium.

3:00: I discover that we are headed to a high school in a city I have never heard of called Humble.

3:45: Madame Stein passes sample tests around the bus so we can practice.  Excluding sophomore Sophia Kontos, no one takes any copies.

4:15: We arrive at the school. Fellow freshman Mia Fares needs help carrying her art project, so we traverse the entire school, which feels like twice the size of the St. John’s campus, in search of the art room.

4:30: We run to our testing rooms and prepare for the grueling tests. There are four 20-minute multiple-choice sections covering French vocabulary, grammar, civilization and listening comprehension.

5:00: I want to cry because the tests are so hard, and I know nothing. There is an ant crawling on the ledge next to me, and instead of going over my answers I try to make him climb onto my pencil.

6:00: The listening comprehension portion is a joke because the passages are read over the loudspeaker, so they’re slightly muffled to begin with, but I can’t hear them at all because someone keeps coughing next to me.  (I didn’t know this at the time, but it turns out that I win fourth place in both grammar and listening comprehension.  Shoutout to the little ant who inspired me to keep going.)

6:45: I stuff my face with a turkey sandwich before running over to drama group rehearsals.  Thank the heavens for boxed lunches. Everyone else has been living off of Kind Bars and Skinny Pop.

7:30: The preliminary drama group round begins!  In order to avoid fainting, I become one with my character, Bérenger, who is a disheveled townsperson resisting the urge to transform into a rhinoceros.  To be honest, French absurdism is actually pretty great.

7:45: Drama Group ends, and I realize that I am competing in sight reading. I run to the designated room and fumble through the most difficult paragraph I have ever read in my life. I try to be cool and get bonus points with the judge by making eye contact, but I just end up losing my place.

9:10: Symposium is over for the day, but not really because I have to memorize my poem for tomorrow morning. In the Hampton Inn room freshmen Sophia Lima and I spend the night helping each other memorize our respective pieces, while Mia conks out within an hour.

French students recite lines on the bus trip to Symposium.

7:30 a.m.: Mia’s alarm rings. We were supposed to be downstairs at seven. Mia goes back to sleep for ten minutes, while Sophia and I dash to the bathroom.

7:45: In a miraculous display of speed and/or divine intervention, we are downstairs and on the bus. Off to day two!

8:00: Since we woke up late and missed breakfast, I devour another healthy serving of Marble Slab.

2:15: DRAMA GROUP FINALS! We’ve rehearsed this play so many times that I don’t even know what I’m saying anymore.  I’m delirious and still riding a sugar high from my third Marble Slab of the weekend.

3:45: Someone brings a DJ to the cafeteria and a massive dance party breaks out with conga lines and the Wobble.  The exact moment I die is when they play “Broccoli” by Lil Yachty.

6:00: Sophia and Mia have to leave to “go see their friend in Footloose at Miller.” I do not buy this lame attempt to avoid the awards ceremony.

6:30: Dinner is some barbecue that does not look appetizing to me, so I settle for my hundredth bag of Skinny Pop.

7:15:  The awards ceremony begins with a performance from another school’s drama group.  Their pronunciation is awful, and one girl literally makes sheep noises the entire time.  I think we’ve got first place in the bag.

8:00 By this point, St. John’s has won so many awards it’s not even funny.  Since Sophia and Mia left early (I’m still salty), I have to go onto the stage whenever either of them or I win an award, which is often. Our drama group wins second!

9:30 On the bus ride back to school, Madame Stein passes back the feedback from the judges for each of our performances.  Someone thought my poem wasn’t dramatic enough. I knew I should have sang it to her.