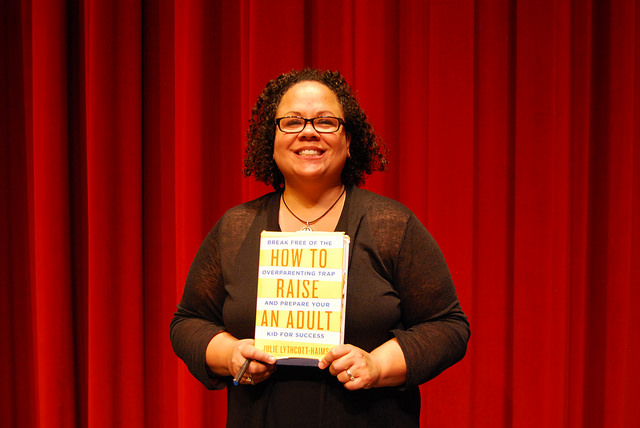 Lythcott-Haims presents her book, “How to Raise an Adult.”

The frantic pace required to get into the few elite colleges has become increasingly fast.

“Parents are expecting all of these things, but we never had to meet these standards when we were children,” Lythcott-Haims said.

Lythcott-Haims addressed the unreasonable obsession with “brand-name” schools. She asked students to consider other colleges and universities besides those on the top of rankings lists, such as U.S. News and World Report.

“At least some of the top five percent of universities should have consideration,” she said “That is over 100, and there are thousands of others with great education and faculty. Why are we always looking at the same 25?”

“I wouldn’t say that this college culture is all negative. A big reason why students are here is to get into good colleges,” Guinn said. “Students could expand the definition of what a good college is, achieving in different ways and not putting everything in the same box.”

Rejection or admission into these schools does not in any way define your worth as a human being.”

Students often place too much emphasis on college admittance as an entire evaluation of themselves, which can be a dangerous mindset for those pursuing colleges that admit under ten percent of their applicants.

“If you don’t get into these colleges, you should think, ‘I lost an admissions lottery.’ Rejection or admission into these schools do not in any way define your worth as a human being,” Lythcott-Haims said.

Citing research about college graduates, Lythcott-Haims compared students who got into “brand-name” colleges with students who were not admitted but had the same qualifications. Twenty years after graduation, both groups had the same average income and net worth.

“It’s not the school. It’s the kid that makes the difference,” she said.

Referencing Malcolm Gladwell’s book “David and Goliath,” Lythcott-Haims talked about the “big fish, small pond” effect. She reminded students that one of the top post-college success factors is the attention students receive from faculty, which is more likely to happen at small college than a large state school.

“With that, you have opportunities opening to you in grad school and the world of work. You don’t want to be someone in the bottom half,” she said.