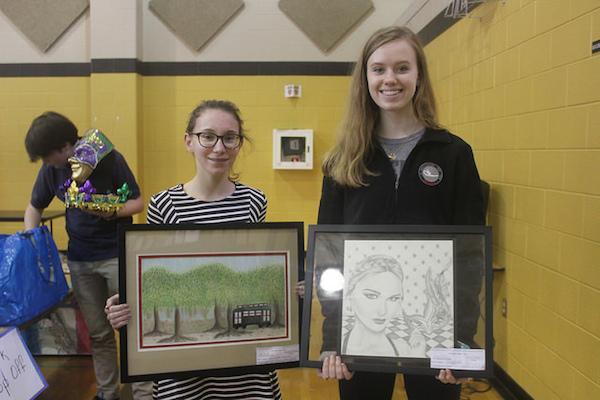 The level 2 drama group performed a scene from the play “Rhinoceros” by Eugene Ionesco. French teacher Shelley Stein led the group’s rehearsal every day during lunch. For freshman Josephine Dodd, the mandatory practice sessions made their first place win even sweeter.

“We spent so much time getting in touch with the emotion of the play,” Josephine Dodd said. “But in our performances, our chemistry combined with our comedic timing was better than in any of our rehearsals. The judges must have felt our energy.”

“I have been taking French for five years and I’ve been to France many times, so I’ve kind of picked up an ear for the language. I also speak Spanish fluently” Valderrabano said. “The grammar concepts and vocabulary are pretty similar in the two languages which helps a lot in taking the tests, but I’m surprised how significantly the competition increased from level 2 to level 3.”

The Instrumental Group practices while on the bus ride to Spring Woods High School.

The theme of this year’s Symposium was “La Louisiane.” Students created visual art for an exhibition about Louisiana’s significance to French culture.

“Typically, when you think of French culture, you tend to think of Paris or the south of France. It’s easy to forget that there are Francophone communities so close to where we live,” junior Helen Dodd said.

To further their exposure to French speaking culture, students tasted Cajun food and played pétanque, a traditional game from Provence, France. Times like these between events were what Helen Dodd enjoyed most about Symposium.

“I practiced French and explored Symposium with people I could not usually spend time with, like freshmen,” Helen Dodd said. “Sharing that experience with new and interesting friends meant even more to me than winning second place.”