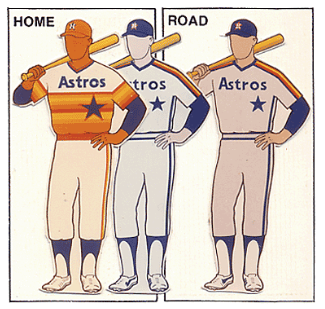 In 1975, the Astros debuted their most memorable jersey. The uniform, now a pullover instead of a traditional button-down, featured a solid block of red, orange and yellow stripes from the chest down in a tequila sunrise pattern.

Nolan Ryan is easily the most prolific and iconic Astros player to ever wear this jersey. Ryan is frequently remembered for throwing his jaw-dropping no-hitters sporting the red-and-orange as well as possessing an abundance of swagger. Without Nolan Ryan, this jersey would possess much less meaning and awe.

Even today, the jersey remains important for the Astros fans and organization. It has the most pleasing aesthetics out of any Astros jerseys ever, which is why fans still wear the design today. The colorful tequila sunrise will always be known as one of the most meaningful and attractive features in the organization’s history.