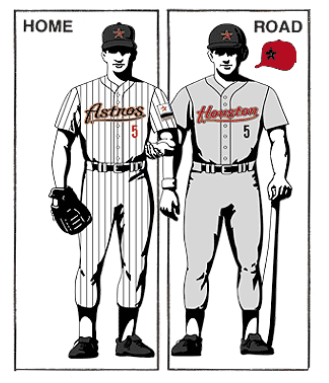 At the crack of the century, the Astros moved into Enron Park—now known as Minute Maid Park. The new ballpark emphasized Houston’s past as an important railroad center in the middle-to-late 1800s by including the famous railroad tracks that sound whenever a home run is hit. To aptly represent this history, the Astros created a new brick-red and black jersey color scheme.

These jerseys have a perfect mixture of colors, pinstripes and lettering. The red-underlined ‘Astros’ and ‘Houston’ were a nice touch to a new team that was improving with new players.

From National League champions to bottom of the division in six years, the Houston Astros went through significant ups and downs while wearing the Enron-inspired uniform. This jersey has a soft spot in Houstonians’ hearts because it paved the way for the current golden age of Astros baseball.