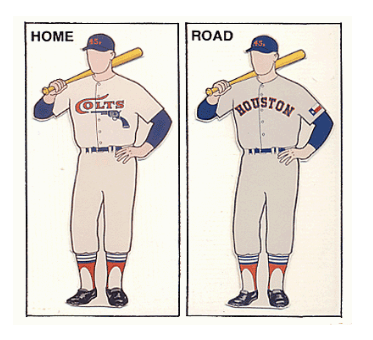 Up until the mid-60s, the Houston Astros were known as the Colt .45’s. Even though the logo rebrand occurred almost 60 years ago, the Houston population still makes significant efforts to stay close to its .45’s roots. Local stores like Academy continue to sell a modern version of the .45 hats, and plenty of spin-off versions can be found on Amazon and other online sites.

The home jersey from this collection features a simple “Colts” lettering and a pistol along the chest. The away jersey is simple and eerily reminiscent of the Astros’ current jerseys. There is nothing entirely spectacular about these jerseys, but they were appropriate for their time.

Although the team would not find immediate success following the debut of the Colt .45 jerseys, these threads are extremely important because they represent an era’s end. The .45’s jerseys were from much simpler, nonchalant days of baseball where fans would pay a buck-thirty for stadium seats and an extra quarter for soda pop.

The Colt .45 jerseys were released at the tail-end of this ‘simple period’ of baseball. As time progressed and baseball became more popular, simple jerseys were suddenly packed with intricate and modern designs, stadiums were experimenting with jumbotrons and game tickets were taking a leap in price. The Colt .45 jerseys are an important artifact in Astros history, to say the least.