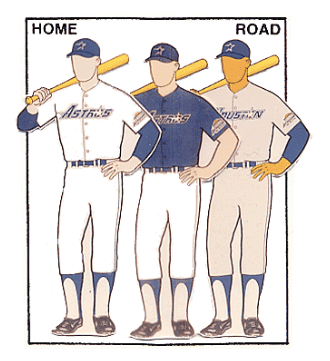 The ‘90s Astros jersey signaled a decaying Astrodome, an up-and-coming future and the rise of a historical group of players called the ‘Killer B’s.’ The Killer B’s was the nickname for the trio Craig Biggio, Vance Berkman and Jeff Bagwell, who led the team throughout the ’90s.

After missing the playoffs through the late-80s and early-90s, the Astros, with the Killer B’s, made the playoffs for three straight years (‘97-’99). While those playoff runs were mostly forgettable, it marked the first time the Astros made consecutive postseason appearances. The nearly 30-year-old ball club was finally finding success in the big leagues, and they were doing so in a dilapidated Astrodome, wearing simple white, blue and gray jerseys with a star over the ‘O’.

The 1990s jerseys were not placed higher on the list because they lack a ‘wow’ factor. Aside from the star that rests on the breast, they were far too simple. The ‘90s was a time of eccentricity and wackiness—a quality that the jerseys fail to properly represent.