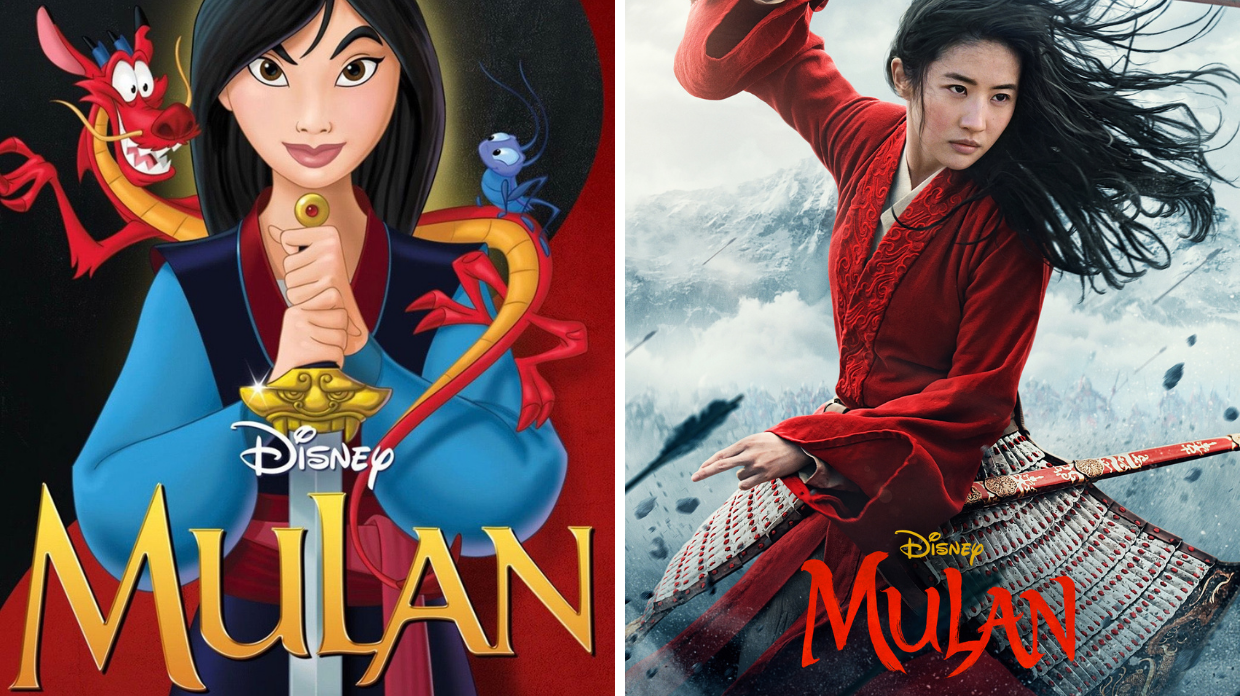 “Mulan” 2020: What happened to the original plot of the movie?

Despite the fantastic framework already set in place and a $200 million budget, the live-action version of “Mulan” somehow still dishonored both Disney and fans of the animated film.

I loved the 1998 animated version of “Mulan.” Sure, it wasn’t always historically accurate and did contain some questionable cultural depictions, but the animated “Mulan” had heart, and it filled the audience with the wonder and magic that was so classically Disney.

“Mulan” was the first mainstream American movie I’d seen that featured a relatable, beloved Asian protagonist. It was the first movie that made me feel represented. Seeing other non-Asians love, respect and accept Mulan made me feel immensely proud and hopeful that like her, Asian-Americans could be seen by the strength of our character rather than the stereotypes of our race or gender.

How can Disney preach empowerment and representation when their own team perverts these ideals? ”

“Mulan” was about empowerment for the oppressed, about representation for the underrepresented, about rising up despite societal standards for one’s right to human life.

But in 2019, lead actress Liu Yifei expressed her support for the Hong Kong police during the Chinese Communist Party’s brutal crackdown of Hong Kong pro-democracy protesters. Directors filmed parts of “Mulan” in Xinjiang, China, the region where over one million Uyghur Muslims are detained in mass internment camps.

How can Disney preach empowerment and representation when their own team perverts these ideals?

And it clearly shows.

In 2019, Disney revealed that the 2020 remake would feature neither Mushu out of “respect for Chinese culture” nor Li Shang because of the #MeToo movement. In addition, the live action would not be a musical, but rather a grittier, darker story that is more true to the “Ballad of Mulan,” the oldest known version of Mulan’s story, and drives home the reality of war.

The biggest and most disappointing move: they made Mulan a Mary Sue.

In both the 1998 animated film and the original ballad, Mulan was not born exceptionally strong or powerful. She was a typical girl in ancient China who resigned herself to the battlefield to save her father.

She struggles alongside her fellow inexperienced soldiers, and in a brilliant three-and-a-half minute montage accompanied by the iconic song “I’ll Make a Man Out of You,” they transform from inept youngins to capable warriors. Mulan gains the respect of both her peers and her (bisexual) commanding officer when she reaches the top of the pole by creatively using the weights to her advantage, not through brute strength like the men had tried. The audience cheered for her—her triumph was satisfying, and her success felt like ours.

There is none of that emotional payoff in the live action. From the beginning, Mulan’s father introduces her as a girl with extraordinary amounts of chi, which she can’t use because she would otherwise be called a witch. Wow, amazing.

While chi is indeed a concept in Chinese medicine and martial arts, it isn’t some all-powerful force that can somehow allow a prepubescent girl to do parkour on the rooftops while chasing a chicken before landing perfectly from the third floor. Chi, directly translated as “air,” is essentially the physiological “life force” or “energy flow” that everyone has. In Chinese martial arts or even Chinese fantasy movies, what’s important about chi is not how much you’re born with, but rather how you practice “qigong,” or the “art of cultivating chi” to utilize it most effectively.

By establishing Mulan as someone who is naturally talented because of her “chi,” the writers gave Mulan no space to grow. They made her “The Chosen One” and removed all the relatability that we know and love. She doesn’t have to learn and fight alongside her comrades: she can just whip out her awesome chi powers and do backflips on a horse while her hair is flowing in the wind and is physically unprotected because she threw down her father’s armor for absolutely no reason. There’s no euphoria from Mulan’s success because we never see her truly fail.

It’s even worse when you consider her sister.

In the 2020 live action, the writers added a younger sister, Xiu, who represents the “ideal girl” back in the ancient times. Demure, obedient and afraid of spiders, Hua Xiu is the perfect archetype to compare Mulan to.

Combined with Mulan’s powers of chi and eventual war fame, her sister is stuck completely in her shadow. This movie tells little girls that if you’re not naturally talented like Mulan, you’re not going to amount to anything other than getting married to a man and staying inside the cycle of patriarchy. Good luck.

Despite claiming that it was going to show a more realistic version of Mulan, the live action still featured a witch, Xianniang, working beside Bori Khan, the main antagonist of the film. Even though the Rourans treat her terribly and she could “tear [them] all to pieces before [they] even blink,” the witch works for them under the hope that she’ll have a place where she’s accepted. Xianniang is a skilled fighter who can shapeshift into a hawk, a person or even a flock of birds; there was no reason why she couldn’t take over the Rouran army or even China herself.

The witch’s character was wasted potential. The movie clearly sets her up as a parallel to Mulan, with both characters facing discrimination because of their identities as powerful women. However, the script doesn’t develop the witch’s motives and mindset as an older, darker version of Mulan, instead utilizing the classic “we’re not so different, you and I” villain speech to force-feed the reader their commonality.

The witch has one of the most frustrating character deaths that I have ever seen. After leading Mulan to the construction site where Bori Khan is holding the emperor, Xianniang turns into a hawk and intercepts the arrow Bori Khan shoots at Mulan, falling dramatically into her arms.

Meanwhile, Bori Khan has conveniently lost his second arrow or decided that they’re having a moment that would be rude to interrupt.

Where is the powerful witch we were promised? A woman can shapeshift into whatever she wants, can kill the entire Rouran army before they even blink, and she was taken down by a measly arrow? The witch who has fought and killed for her freedom is willing to give her life for a girl she’s met thrice? Please. The writers just wanted a convenient redemption arc that seems like it should be moving, but really just cheapens the characters, the plot and the “feminist” message.

The butchering of side characters

The live action “Mulan” destroyed its side characters. Gone were Mulan’s beloved friends Yao, Ling and Chien-Po; only the shrivelled flesh of their characters, unmemorable and unremarkable, were left.

In the animated “Mulan,” each character had their own story and vibrant personality, making their mark on the minds and hearts of the audience. The animated film followed the growth of their friendship and eventual strong rapport with Mulan.

In the live action, Yao, Ling and Chien-Po were recognizable only by name, their screen time cut in favor of showing Mulan’s “greatness.” The live action barely showed any meaningful interactions between them and Mulan, and when it did, it left me cringing at the awkward tension. The writers clearly want to show their strong friendship in scenes such as their meal together or their talk before the big battle; however, because we don’t see them develop those bonds or help each other through training, the jokes and attempts at friendly banter come off as uncomfortable and misplaced.

You don’t have to butcher the male characters to write a feminist story. Quite the opposite, really. The reason why the 1998 Mulan was so powerful was because it showed a human side to everyone. Mulan, a naive and inexperienced girl, struggled in the military camp, but so did everyone else. Yao, Ling and Chien-Po, along with the other amateur soldiers, learn to fight beside her and eventually grow to respect her as a fellow soldier who has the wit and determination to rise to the challenges of war. Mulan is not limited by her gender—she keeps up with and even excels amongst men because of her own hard work.

The 1998 “Mulan” takes this even further by showing Yao, Ling and Chien-Po’s personal growth from hyperfixating on masculinity to valuing feminine traits, even cross-dressing as women in order to save the emperor. By having the male characters learn from Mulan and put aside their hypermasculinity, the 1998 Mulan highlights the importance of femininity and brings the story full circle.

Ultimately, the live-action “Mulan” was a disappointment. I was so excited to see more Asian representation on the American silver-screen and mourned the movie’s delayed release. However, I could not enjoy the movie knowing that Disney had wasted so much potential (and money) on this pathetic shell of “Mulan.” I didn’t have to look hard to find someone else who felt as dissatisfied as I was.

As a person who grew up on Disney animated films and adored their inspiring stories, I felt let down by this “Mulan.” In their future endeavors, I hope that Disney can learn from their mistakes and reignite that hope and joy in their audience, let us believe that dreams can really come true.

Because during these difficult times, don’t we all need a little more wonder in our lives?

View Comments (3)
About the Contributor

Celine is a senior in her fourth year on The Review. Her favorite animal is a wolf, and she loves having philosophical discussions and overthinking everything.