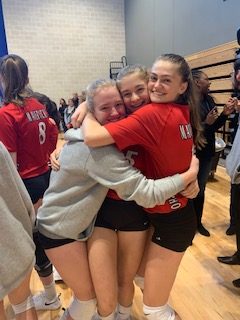 The girls’ volleyball team embraces after clinching an SPC victory.

In the final moments of the fifth set in the SPC third-place match, the Mavs trailed John Cooper 12-13. Two points from losing, the team rebounded the way they did throughout the entire season, winning the next three points to clinch the match.

The Mavs’ comeback resembled the overall picture of their season. According to captain Celia Adams, the team had the opportunity to practice different kinds of lineups after several starters suffered injuries in August and September. This experimentation made the team more prepared in the long run. In the SPC match, they twice trailed by a set, but they ultimately stormed back to win the match in five sets by adjusting to their opponents’ gameplans in critical moments.

Adams states that the team embraced the challenge of pushing past injury struggles by stepping up their game. She praises the team’s freshmen, Margot Manning and Katherine Nelson, on whom “the team truly relied,” for “consistently doing an incredible job throughout the season.”

Captain Savannah Farmer attributes the team’s ability to persevere through difficult situations as a key factor in their success.

“One trait that defines our team is our ability to shake off mistakes,” Farmer said. “Everyone stayed on the same page, which allowed us to fix errors and keep opponents from going on big runs.”

The team’s perseverance through difficult situations does not only apply to volleyball. Players like Nelson have adapted these lessons to academics.

“Volleyball has taught me how to calm myself down when the intensity increases,” Nelson said. “This has translated to taking tests and giving presentations because I am able to relax and focus.”