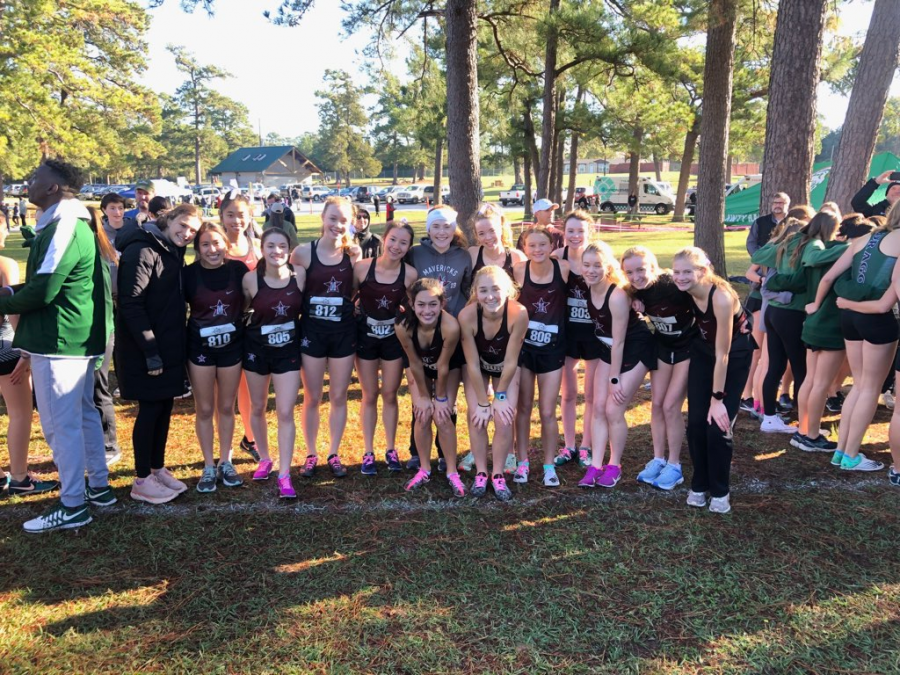 The girls’ cross country team focused on personal improvements and teamwork this season, resulting in third place at SPC.

Girls’ cross country finished third in this year’s SPC race with their best finish and ahead of Kinkaid. The team’s success reflects their mentality throughout the season: keep improving.

In four out of five 5K races this season, sophomore Rebecca Bollich improved her most recent time. At SPC, she finished as the Mavs’ seventh runner, cutting her personal best by three minutes. Bollich’s personal improvement mirrors her team’s jump from seventh in SPC last year to third place this year.

According to Bollich, motivation to follow through with her goal led to this improvement.

“I’ve carried self-discipline every day,” Bollich said. “I attribute mindful thoughts and what I put into my body to my success this season.”

Bollich is not the only one to do so. According to sophomore Caroline Thames, the entire team has been more dedicated than in the year before. Runners pull each other through tough workouts and meets, and their focus has been placed on self-improvement. As a result, the Mavs’ final place surpassed their expectations.

“We trained to make both ourselves and each other better,” Thames said. “We knew that we would place higher than last year, but third place was a great surprise.”

At the beginning of the season, runners’ cars were broken into during practice at Spotts Park, and injury struggles waylaid several runners. The Mavs remained optimistic by racing not only for themselves but also to honor their teammates’ efforts.

“Before the championship race, I knew that 20 minutes of pain was worth enduring for my team,” Thames said. “We worked for each other all season, so it felt fitting.”

Through her athletic growth, Bollich has learned how to similarly grow in her academic pursuits. One motivational technique she uses is to remember her toughest workouts and how they have benefitted her during races.

“The same goes for grades: the harder I work, the more I’ll improve,” Bollich said. “I remind myself of what I’ve done before and trust in my training, be that through studying or practice.”