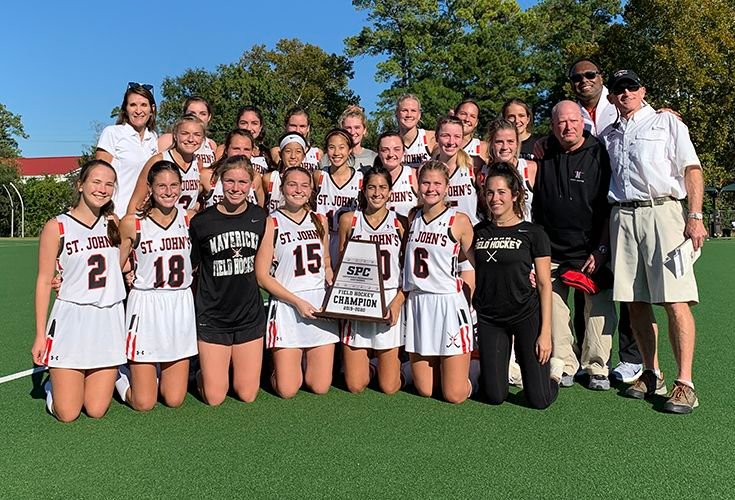 The field hockey team defended their 2018 SPC championship and finished undefeated for the second consecutive year.

Sophomore Sloan Davidson steps up to the shootout line and stares down the Kinkaid goalie. At the blow of a whistle, Davidson dashes to the right and buries the ball into the back of the net. The field hockey team swarmed onto the field in celebration, after defending their 2018 SPC championship and finishing undefeated for the second consecutive year.

Some victorious teams become complacent after winning one championship, but the Mavs remained focused on winning the championship again this season. Having this clear purpose helped them maintain an edge over opponents.

According to captain Kate Ainbinder, the team raised their level of play at the beginning of the season. At a national invitational tournament from Sept. 20-22, they faced competition from other teams that ranked in the top 45 nationwide.

Throughout the season, the team maintained their dominance over the competition, despite some near losses. Kinkaid came closest to staining the Mavs’ pristine record.

Although the Mavs finished with a 5-0 record over their crosstown rival, Ainbinder claims that the Maverick-Falcon rivalry was much closer than the head-to-head record indicates. The Falcons adapted to the Mavs’ style of play throughout the season, challenging the team to step up.

The Mavericks acquiesced. In their second victory over Kinkaid, they overcame an 0-2 halftime deficit to defeat the Falcons 3-2. The team took the game both as a stark reminder of the difficulty of their goal of winning SPC and as a motivator to push themselves even harder. Across the rest of the season, the Mavericks scored 64 goals and allowed only two.

“We strove to play as one cohesive unit,” Ainbinder said. “Our work ethic and drive to be the best allowed us to remain undefeated throughout the season.”