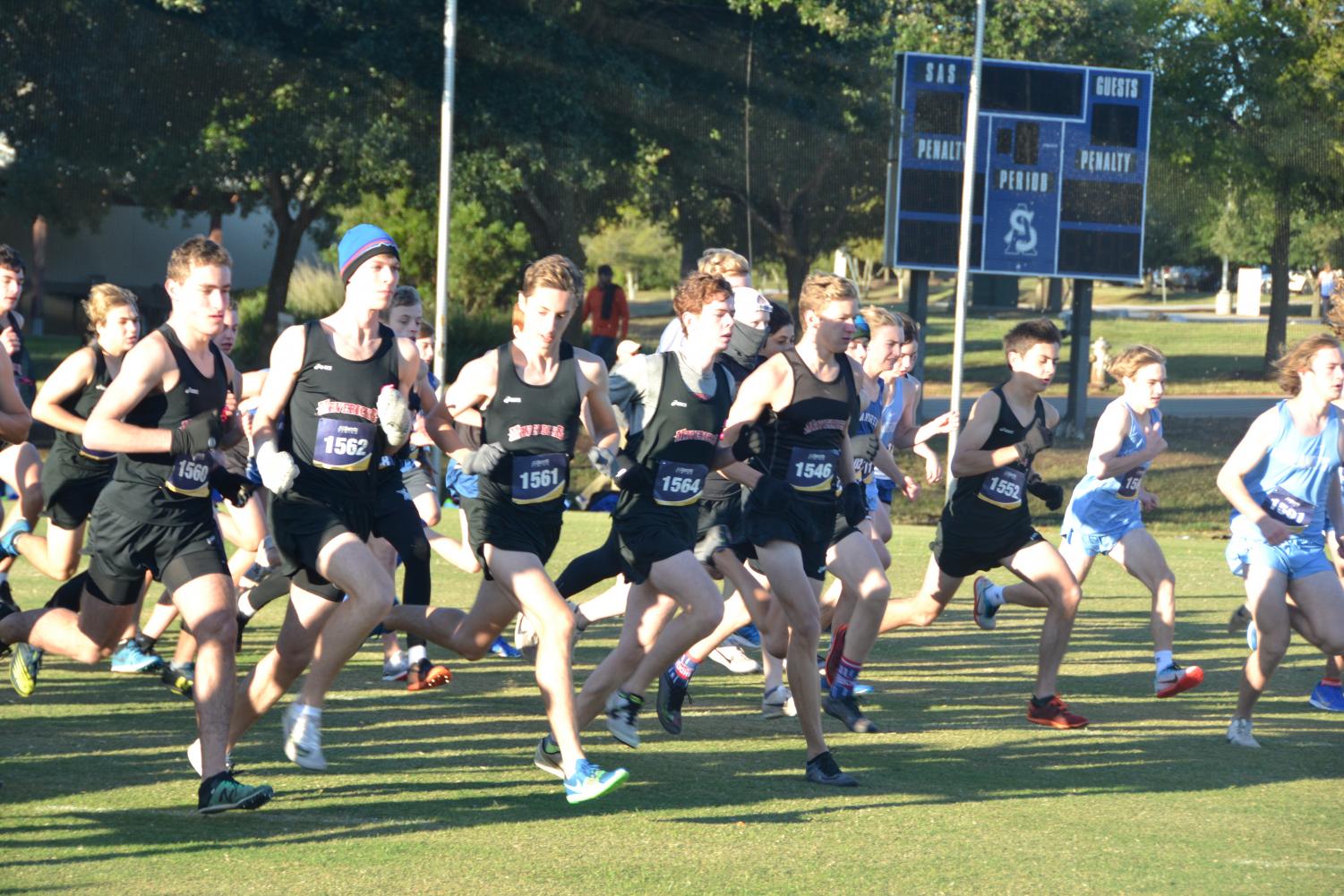 The boys’ and girls’ cross-country teams competed in South Zone at St. Andrew’s Episcopal School on Oct. 28. Both teams will run at SPC on Nov. 9 at 8 a.m. in Tomball’s Spring Creek Park.

Just as freshman Cameron Ederle was about to fall asleep, he received a notification from Olive Garden—a response to his DM suggesting that the restaurant should include buttons for ordering breadsticks on their tables.

Every night before an important race, the team eats dinner at Olive Garden for good luck. The boys’ cross-country team woke up the next morning determined to win the South Zone meet.

The race started at 8:30 a.m. at St. Andrew’s Episcopal School in Austin. The Mavs breezed through the first bit of the race with senior captain Davis Thames and sophomore Emmanuel Sgouros finishing the first mile in under five minutes.

“We went out a little fast because of the downhill and the adrenaline,” Thames said. “The second mile is where the hard uphill was, but for me the third mile was the toughest.”

The Mavs captured their second South Zone championship in two years, obliterating a strong field with eight runners in the top 20.

“It felt really good to make the top 20, especially because the competition was better this year,” senior Peter Wade said.

For seniors like Wade and Thames, the South Zone meet was one of their last races with the team.

“The people on this team have been my go-to’s,” Wade said. “They’ve been my family these past four years.”

Wilson is in his third year on The Review. He is Afraaz and Russell's mentee.

Thirty minutes before their race started on a chilly Saturday morning, half of the girls’ cross-country team was missing. Those who remained near the team tent were trying to stay warm by running around or doing jumping jacks, not at all resembling a functional team that was about to run a 5K race.

The missing part of the team had resorted to alternative methods of keeping warm, including hiding in the bathroom. But they weren’t complaining about the cold.

“The weather conditions were perfect,” captain Grace Knowles said. “The cold made everyone faster. You run fast so you can get out of the cold.”

In their last meet before SPC at St. Andrew’s School in Austin on Oct. 26, the Mavs learned how to brave the elements and dress in layers, with many runners wearing gloves and undershirts.

“The start was really fast and forced you to get out quick,” captain Julia Jones said. “It’s a course on which it’s hard to run if you zone out, so you’ve got to stay engaged.”

Although pre-meet preparation in the cold is never fun, the team agreed that the cooler weather made everyone’s times faster. The Mavericks set ten personal records, with four runners being named All-South Zone medalists: Cici Calhoun, Catie Beck, Nora Doughty and Natalie Boquist. The Mavs finished third out of seven schools with Kinkaid, Episcopal and John Cooper taking the lead.

“The course was good,” freshman Katie Karlson said. “The hills made it challenging, but the cold air was a welcome distraction.”

Natalie Boquist is a junior in her third year on The Review. She loves watching baseball and will only drink apple juice out of a juice box.