Pod on the Quad: Astros Edition is a new series of podcasts hosted and produced by Copy Editor Ella West that will follow the Astros as they compete in the World Series. Be sure to listen to every podcast before each game!

I’ve been featured on the official Astros Instagram. I’ve met Justin Verlander and nearly every member of the Bregman family, I’ve had dinner with backup catcher Garrett Stubbs and I dedicated a good chunk of my summer to reading Ben Reiter’s Astroball. I bleed orange and blue, and I was lucky enough to be in the ballpark when the Astros defeated the Yankees to secure our place in the World Series.

Game 6 of the ALCS was really and truly insane. I’ve never seen Minute Maid Park with that much energy before. My family and I sat right next to the Astros bullpen, and I nerded out the whole time because it was such a pitching-focused game. I got to see who was warming up each inning (we used seven pitchers in total), and one of the bullpen catchers actually threw me Roberto Osuna’s warm-up ball.

The energy was undeniably palpable, both when the feelings were positive (Yuli’s 3-run homer) and when they were negative (when DJ LeMahieu tied it up in the top of the 9th). I got his homer on video, and I was crying. And then, in the bottom of the 9th with the score tied, out of nowhere comes Jose Altuve’s bomb to win it. I jumped up, stunned in the moment, but also not altogether too surprised. Altuve is focused and determined, and he’s never given up, even when Minute Maid turns into a pressure cooker.

Watching the victory ceremony afterwards, I just felt all the feels. I spent my spring break at their spring training facility in Palm Beach (where both the Astros and the Nationals prepared for the upcoming season), and we actually went to the Astros vs. Nats exhibition game. Crazy to think we watched them in spring training, and now they’re facing off in the World Series.

I can’t wait to watch this series. The Astros are favored, but who can really predict October baseball? Anything could happen. Astros could win it in 4, we could lose it in 7, honestly, who knows? Our starting pitching must be spot-on. Cole has to pitch the way he has been pitching since May. Greinke will have to step up to the plate again (he will pitch Game 3 and have to bat in the National League park). Verlander has to figure out how to come back from his Game 6 first inning let-down. I’m feeling pretty good about it all. Our bullpen is deeper, and we have Jose Altuve. Period. 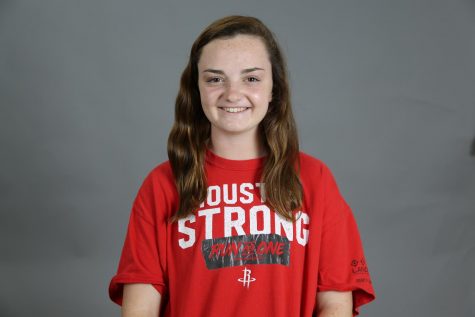 Claire Seinsheimer is a senior, and this is her third year on The Review.

My Astros fan experience began back in the days of the open, red star logo. I would watch the games with my family from time to time, and I proudly wore all my brother’s hand-me-down Astros shirts, jerseys and baseball caps. My brother had a Lance Berkman Russian nesting doll which I thought was the coolest trinket I had ever seen, and my childhood piggy bank was a commemorative tin in honor of the Astrodome. I wasn’t necessarily an avid fan back then, since I had Lower School priorities to worry about, and the hype around the team eventually wore off. My family and I rediscovered our love for the team during the aftermath of Hurricane Harvey in 2017.

My family was luckily spared in the torrential downpours and remained unflooded throughout the consistent rain. We were still stuck in our home while the skies wreaked havoc upon Houston, and our only source of entertainment was following the new-and-improved Astros.

With nothing but time on our hands, we watched the games and learned the personalities of the players. Just like Jose Altuve, we literally fell in love with Justin Verlander and how he gives a little hop after every pitch. We talked about how teeny-weeny ‘Tuve is, and we quickly chose our favorites, mine being George Springer while my mom went for manager A. J. Hinch.

My family’s love for the team hasn’t dwindled, though our favorites have changed a bit (I’m a Gerrit Cole girl now because, how can you not be?). My mom and I watch every game together when we can, and when I’m too busy with volleyball or the Review, we text each other live updates and reactions, which are generally in all-caps and rather profane.

The Astros provide a guaranteed constant in our lives. Their 162-game schedule allows us to watch them play more often than other Houston sports franchises, and the team itself gives us something pure and genuine to root for. They’re a personality team, and they get along. It’s so easy to get invested in their relationships because they just seem so real. They’ve got dugout traditions, they aren’t afraid to show physical affection, and each player constantly turns down personal compliments and redirects the praise towards the entire team in postgame interviews. They also extend their wholesome team dynamic to their regular reporters, including Julia Morales in their champagne celebrations, which the female sports journalist in me just adores. It also doesn’t hurt that they’ve made it to the World Series twice in the past three seasons.

The Astros are more than just about winning. They’re an extension of my family, invited into our living room every time they play, and they’re the reason why Claire and I became friends. She’s the real Astros fanatic of the two of us.

SJ is a senior, and this is her third year on the Review.