Legendary for slamming cake in unsuspecting faces and performing daring basketball trick shots and impromptu cheerleading skits, Clutch the Bear is the city’s most celebrated mascot. Robert Boudwin, the man behind the iconic Houston Rockets mascot suit, came to speak with students on Sept. 27.

Used with permission from Robert Boudwin.

Sophomore Jackson Humphries invited Boudwin through his newly created Sports Management Club. After attending a sports management seminar at Yale, Humphries was inspired to form a community of fellow sports fans who are interested in this topic.

“I’ve always wanted to learn more about what went in the logistics of sports,” Humphries said. “After the Yale expo, I have a much better understanding of that and I think it would interest a lot of my friends.”

Humphries reached out to Boudwin in August. Humphries mother, the former Rockets’ team attorney, got Boudwin out of some legal trouble involving another mascot — since then, the families have been close friends. With Boudwin’s 21 years of mascot experience and new job as Assistant Athletics Director of Marketing and Event Presentation at the University of Houston, Humphries thought that Boudwin would be the perfect speaker for his club’s first meeting.

In his speech, Boudwin spoke about his rise to fame as Clutch, particularly memorable experiences such as accidently shooting Rockets’ player Cuttino Mobley with a t-shirt gun, and his heavy involvement in philanthropy.

Boudwin’s mascot career began during his years at the University of Delaware in the early 90s. He launched their new mascot, YoUDee (a fighting blue hen), and taught mascot camps at the Universal Cheerleading Association. Encouraged by other cheerleaders, he auditioned to be a mascot for the Rockets in 1995. He subsequently relocated to Houston to introduce the new character of Clutch, a lovable yet mischievous teddy bear, beginning his 21-year tenure as Clutch.

“Being Clutch the Bear just exceeded my expectations,” Boudwin said. “When I started this job in my senior year [of college], I thought it would just be a fun thing. Do some funny skits, rub some bald heads and whatnot. But I ended up doing this for 21 years, and I’ve loved every bit of it.”

Those 21 years were very eventful, according to Boudwin. He performed as Clutch in 12 different countries, spreading his affection to places as far as China. He participated in an Armed Forces Entertainment Tour, performing at an active military base for on-duty Apache helicopter troops.

“There were 1200 troops, all starved for American culture and entertainment, and I was their source for that,” Boudwin said. “I was so nervous — would these tough military men laugh at a corny teddy bear? But they were so appreciative — laughing, cheering — some even lined up for autographs after. It really was the highlight of my career.”

Boudwin has also localized his productions, performing school shows in front of at least 1.2 million kids every year. To promote literacy, Boudwin wrote seven children’s books and donated over a half a million copies to children around Houston.

“It wasn’t just a game; I eventually built this character into a business centered around helping schools and children,” Boudwin said. “I take pride in being able to inspire and help educate our youth. I can help them dream about college when they probably would not have before. All those things made for a very fulfilling, dynamic, entertaining job.”

Promoting literacy is just one way Boudwin has leveraged his fame for good. In 2012, his father’s life was saved by a double lung transplant. Since then, Boudwin has been an avid supporter of organ donation. He has run two half-marathons, run 13 5Ks in 13 days and biked 25 miles to raise awareness — all in the full Clutch costume.

“Beyond just making a living for my family, I can use Clutch in a lot of rewarding ways to help people who need it,” Boudwin said.

In 2016, Boudwin left his term as Clutch to join University of Houston as the Assistant Athletics Director for Marketing and Events Presentation- a job that entails several of the talents Boudwin accumulated during his time as Clutch.

“Basically my job is to handle how we present the show,” Boudwin said. “The time-out entertainment, the music, the video, the half-time, the MC, the DJ, the special promotions, the scripting- that’s all me. All stuff I did as Clutch for 21 years.”

Boudwin ended his speech with a proclamation of city council and mayor candidacy: “I want to run for city council in November 2019, and eventually, I want to be your mayor.”

Ella is a senior in her fourth year on Review. Her dream is to go skydiving, and she's addicted to Honey Nut Cheerios. 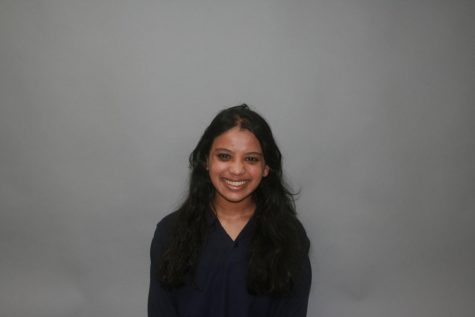