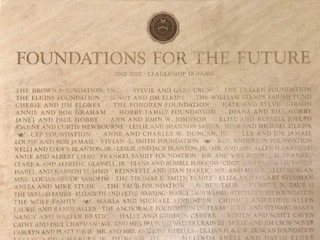 These names were etched into a section of stone in Mewbourne Hall to honor all the donors who contributed to the building.

When Mathematics Department Chair Martha Childress began teaching at St. John’s in 1981, her Quad classroom was situated between Philosophy and Spanish classes.

While most math and science classrooms are now grouped together by department, such was not always the case.

“You really got to know people from other departments,” Childress said. “The School had a different feel.”

Originally, classrooms in the Quad each fit roughly a dozen students, a limitation that caused problems as the School grew.

At one point, math teacher Kimm Shafer taught in four different classrooms. According to Shafer, students sat so close together that one once kicked the buckle off her shoe by accident while he was trying to get comfortable at his desk.

“That’s how close [students] were to the board,” Shafer said. “We had no space in those little-bitty rooms.”

When the construction of Mewbourne was completed in 2006, the names of hundreds of donors were carved into the rock on the first floor, a testament to the people who made the building possible.

“Whenever I walk by, I see the different names of people who have been so supportive of this school, some of them who aren’t here anymore,” Childress said. “We’re so lucky to have families that support our school in lots of ways.”

Shafer, who now teaches in Mewbourne, says that the dynamic of the campus changed with the construction of Flores Hall opposite Mewbourne.

“The heart of the school had always been the Quad, and I almost feel like the heart now is where Mewbourne and Flores [meet],” Shafer said.