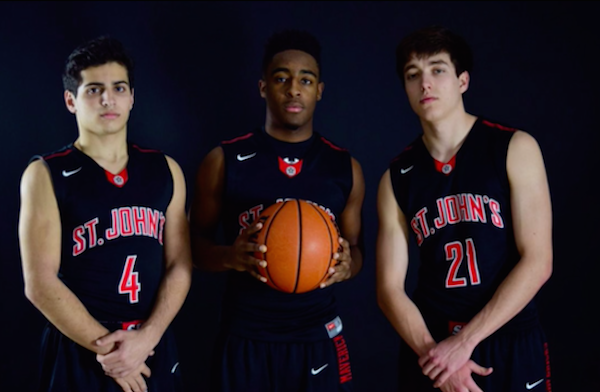 This piece was originally printed in the March 2017 issue of the Review.

In the post-Justise Winslow era, the boys’  basketball team has been searching for an identity. Their big idea was to go small.

Without much height on the team, the Mavericks have turned to a smaller lineup with better outside shooting ability. This style of play, commonly known as “small ball,” has swept across the NBA in recent seasons and is now reaching high school courts.

The Golden State Warriors, with the best record in the NBA, are known for their use of a small lineup, led by reigning MVP Steph Curry.

The average NBA center stands at about 6’11’’, but the Warriors often play Draymond Green, who is only 6’7”, at the position. The Warriors surround Green with shooters and offensive players, then rely on Green to play physical defense and protect the basket.

The Mavs often use a lineup with center/forward Sachin Jaggi who stands 6’2″, two inches shorter than the average SPC center.

Head coach Harold Baber caught on to the new style by watching NBA and college basketball.

“I will admit it. I am a thief,” Baber said. “You see something as a coach, you like it, you think it would be good for your team. I try to be a student of the game.”

“I am not saying Cliff is Steph Curry, but Curry moves a lot off of picks to get open shots,” Baber said. “I look at that to see how to get good shots for Cliff.”

The Mavs have bought into the small ball style.

Players emphasize the athletic advantages they have over the bigger teams, such as Kinkaid, which have helped them guard quicker players and remain competitive.

The Mavs finished the season with a 19-15 record, totaling more wins than the last two seasons combined.

“We can run a lot, and our guys won’t get tired,” senior captain Jid Ganim said. “We can pressure on defense a lot without getting beat off the dribble.”

Guidry, the leading scorer, expressed his fondness for the innovative style.

“I can get a lot of open shots, and there are more driving lanes for the team,” Guidry said. “I really like small ball and think it helps our team.”

The small ball movement was not always guaranteed to catch on. The Mavericks experimented with different lineups during the preseason, testing a “big” lineup, which featured three players over 6’2’’ on the court at the same time.

“We have the option to go big if we need to,” Baber said.

Baber has experience coaching a taller group. In previous seasons, the Mavs utilized lineups that featured more height such as NBA star Justise Winslow (’14), who is 6’6”, and Paul Labanowski (‘16), who is 6’8”.

Without as many tall players this season, Baber says small ball is the best approach for his team.

“Being small has way more advantages than disadvantages for us,” Baber said. “When you can put five people out there that can stretch the floor and shoot threes, it is very hard to guard.”

Defensively, the Mavericks have been able to check taller opponents with double teams and defensive help near the basket.

With the core group of players returning next season, small ball will be back.