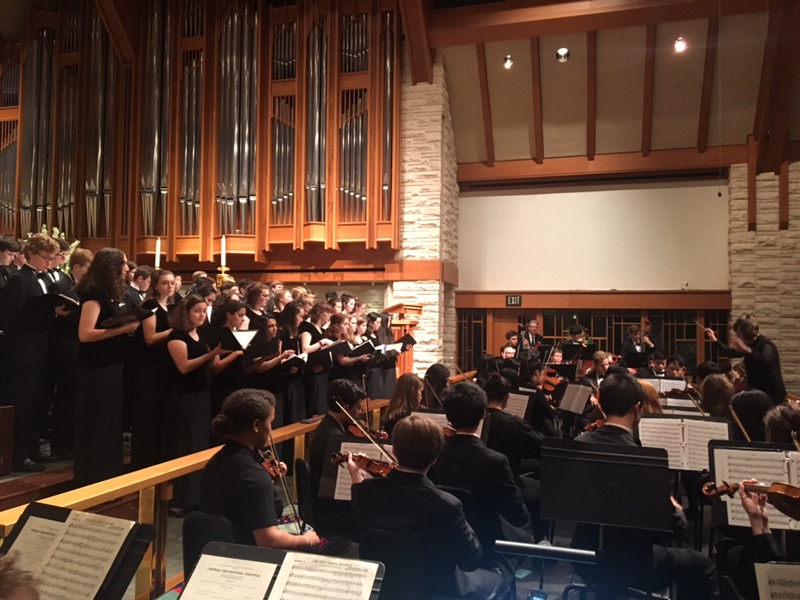 Directed by Penny Meitz, the choirs and orchestras performed in St. John the Divine Church.

Nathaniel Crain has been singing in Chorale for four years, yet this year’s Choral-Orchestral Festival was one of the most challenging performances he has ever experienced. With less than a month to rehearse, Crain, the Bass II section leader, relied on practice tracks and organized sectional rehearsals to limited rehearsals.

On the evening of Feb. 4, Upper School choirs and orchestras collaborated in the annual Choral-Orchestral Festival at St. John the Divine Church. The festival featured Choral ensembles Les Chanteuses, Chorale and Kantorei in addition to Orchestral ensembles Philharmonia and Chamber Strings.

Ensemble members and directors felt more pressure to prepare for the festival because they had less than a month to learn and master the pieces. The amount of practice time was significantly less than preparation for the Fall Choral Concert, Candlelight or even previous Choral-Orchestral Festivals. This shortened rehearsal time resulted from extending Winter Break further into January.

“We barely made this concert,” choral director Scott Bonasso said. “One fewer rehearsal and we wouldn’t be ready. We used every minute — it’s been a race.”

Sophomore Casey Propst also had to sacrifice free time for additional rehearsals for the three different ensembles to which he belongs: Chorale, Kantorei and Philharmonia.

According to Bonasso, Chorale especially felt pressure during the rehearsal process because of their 13-minute Cantata piece: Gerald Finzi’s “In Terra Pax.” The difficult piece “In Terra Pax” demanded all available rehearsal time before the Winter Break, so Chorale only had January to focus on the festival’s music.

“For the time we were given, the performance was well done,” senior Gray Watson, president of Chorale and Tenor section leader, said. “I’m really proud of the choir because we managed to get through performing without much practice.”

Sophomore Elijah Dahunsi, a member of Chorale, said that the shortened rehearsal time pushed the ensembles to prepare more efficiently.

Shortened rehearsal time was not the only challenge performers faced in preparation for the festival. Director of Les Chanteuses Brendan Emig focused the majority of rehearsal time on the technicalities of Baroque music, a popular style of music in 17th- and 18th-century Europe. According to Emig, Les Chanteuses spent many rehearsals focusing on melismas, a group of notes sung on one syllable.

“This repertoire across the board [was] a little ambitious, but we did a phenomenal job,” Emig said. “This [was] definitely some high-caliber music.”

The three Upper School choirs combined with the two Upper School orchestras to perform “Zadok the Priest,” one of the Coronation Anthems composed by George Frederick Handel.

“The fact that it sound[ed] so good and that they [did] it so well is a testament to the musicianship and capability of the musicians in strings and choir,” Bonasso said.

Ensemble members enjoyed performing in the Festival, despite feeling pressed on time in the days before the concert.

“The Festival was an exciting way to showcase the fantastic ability of our Upper School singers and instrumentalists,” Dahunsi said.

“It’s always a challenge to get the pieces ready in time for the festival,” Crain said. “This year was even more of a challenge, but we found a way to pull it together.”

To listen to recordings of the performance, click here.