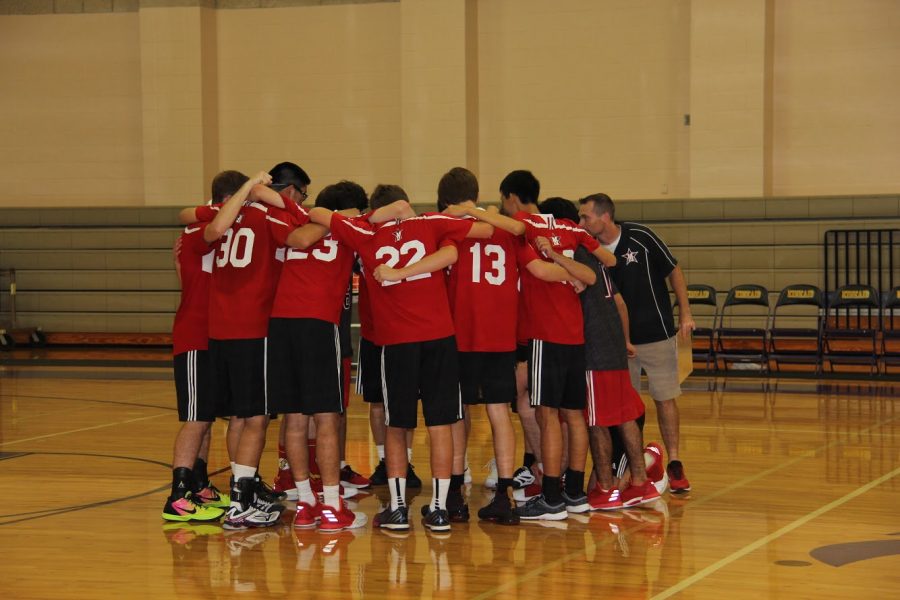 The team huddles before taking on St. Stephen's.

The team, unfazed by the prospect of playing two teams on consecutive days, felt determined going into the first game against St. Stephen’s.

“We have a very rich history against St. Stephens,” captain Justin Owens said. “We really don’t like those kids too much, so we had a kind of ‘We got this, let’s beat them’ mentality. There was definitely a high level of confidence going in.”

Despite their resolute mindset, the Mavs struggled against St. Stephen’s throughout the match. According to defensive specialist Natty Crain, an abundance of trash talk and background noise led to difficulty maintaining composure and staying focused.

“There was a lot of rude conduct all around, and on top of that, St. Stephen’s had a big crowd cheering them on,” Crain said. “All that kind of rattled us from the start.”

Although the team expected to win both games, they still learned from their loss.

“It was rough not winning the first night, but we learned some stuff about our team,” Crain said. “We learned how much potential we had, and we really capitalized on that going into our game on Saturday.”

Owens praised the hard work of the benched players who contributed to the team’s victory the next day.

“Our players that came in from the bench really stepped up and made some great plays,” Owens said. “Our serving was decent. We’re really improving, which is very promising.

According to Owens, the team needs to find more confidence to improve their prospects going into SPC.

“Even though we’re down, we really need to get back into the game. Everyone’s personal confidence levels needs to be high,” Owens said. “We need to capitalize on the level of talent we have.”