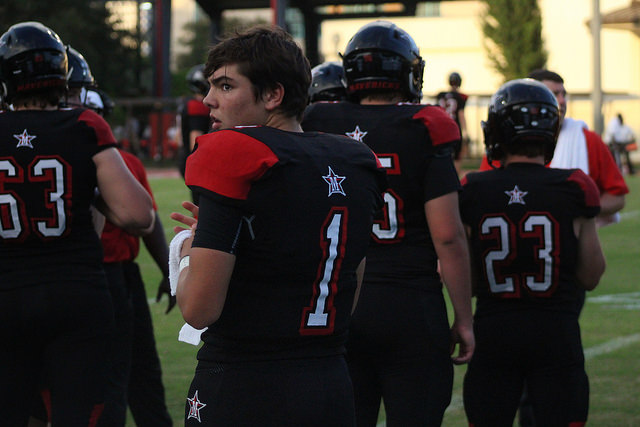 Coming off a bye-week, the Mavericks faced the St. Mark’s Lions on Friday, Sept. 28 and won for the first time post-quarterback change.

After first-string quarterback captain Wesley Gow tore his ACL and sprained his MCL, sophomore George Caldwell took over, and the Mavericks have made changes to the dynamics of the team to make up for the loss of a key player. According to Caldwell, the extra week of practice helped the Mavericks clench their 33-16 victory over the Lions on Friday.

“We knew St. Mark’s was going to be a challenging team to play,” Caldwell said. “With the extra week of practice, it makes it seem like forever in between games. We came out extra prepared and excited.”

On the Mavericks’ first touchdown drive, senior Genson Hooper-Price set up the touchdown by receiving a swing pass and reached the one yard line. Juniors Will Skinner and Will Leger set up blocks to allow Hooper-Price to gain yards. On the next play, captain Malcolm Sturgis walked the ball in to put the Mavericks on the scoreboard. The Mavericks retained their 7-0 lead into halftime.

“Everyone on the team played really well,” Caldwell said. “I’m proud of the way we played as a unit.”

The Mavericks came out of the locker room ready to stretch their lead. On their third drive of the half, Skinner ran a post route and gained 67 yards for the touchdown. Sturgis scored another touchdown in the second half after Leger led the Mavericks to the Lions’ six yard line. The Lions retaliated on the next drive with a 31 yard pass for a touchdown.

“Coach Gleaves kept telling the sidelines that the game was not over and to keep playing hard after that point,” Caldwell said.

Following Gleaves’ advice, the Mavs pressed their lead further, with another touchdown from Skinner. The Lions had not yet given up and pushed down the field to the Mavs’ 38 yard line, where captain Roman Lewis took their quarterback down for a 12 yard sack on a fourth down. Sophomore Landon McKelvey scored the last touchdown of the game, and the Mavericks left Dallas with a new sense of confidence.

“It always feels good to win and enjoy the moment, but then it becomes time to prepare for the next one,” Gleaves said. “The coaches are doing a great job adjusting, and the players are putting challenges on their shoulders to carry us to our team goals.”